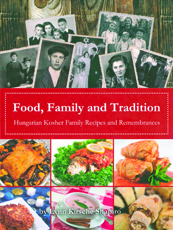 She also learned to cook on a larger scale at her parents’ store. Her parents, Margit and the late Sandor Kirsche, founded Hungarian Kosher Foods, now located in Skokie. Theirs is the largest all-kosher supermarket in the Midwest. Both of her parents survived the Holocaust-Sandor, originally from Czechoslovakia, and Margit, from Hungary. Yet their traumatic experiences did not prevent them from living full lives, as they were able to dance, laugh and work for the future, Shapiro said.

Margit lost her eyesight several years ago, which became the impetus for Shapiro to record her mother’s recipes. “She never measured anything, yet my mom’s food always came out the same,” Shapiro said.

She eventually compiled her mother’s recipes into the recently published, Food, Family and Tradition: Hungarian Kosher Family Recipes and Remembrances. More than a cookbook, there are photos and stories about Shapiro’s family interwoven with 150 original recipes.

“Through the lens of food, you get a picture of daily life,” Shapiro said. “After I started putting this book together, I understood that my family’s recipes and history were part of a larger world: the traditional Jewish life in Czechoslovakia and Hungary before the Holocaust.”

Without sugarcoating her parents’ experiences, she instead focused on the strength and courage that they and other survivors had in order to leave their lives and start again. “I wanted to go beyond the horrors of the Holocaust,” she said. “Strong family traditions were the bedrock on which our parents, and so many Holocaust survivors, were raised.”

The book has two parts. The first is a family memoir with period photographs, biographies, a family tree of victims and survivors, and original vignettes about Jewish culture, kosher wine, holidays and traditions. The second part consists of 150 kosher family recipes with preparation methods for the contemporary kitchen.

Each recipe-labeled dairy, meat, or pareve-includes notes regarding ingredient substitutions, preparation tips, serving suggestions including kosher wine pairings, and timing. Family stories–sweet, bitter, and bittersweet-put the recipes in the context of the rich, vibrant Jewish life and culture in Eastern Europe prior to the Holocaust.

“These are comfort recipes,” Lynn said. “I tried to make this book appeal to anybody who wanted to celebrate the traditional foods of Eastern Europe, rather than only to survivor’s children or Jewish people.”

“The book could be used as an educational tool in so many ways, as another medium to learn about Jewish history, Jewish tradition and the Holocaust,” Shapiro said. “It’s exciting to me that people might sit around their tables and begin telling their family stories, asking questions and learning about their own history through food.”

The book is available at Hungarian Kosher Foods and at www.hungariankosher.com and www.jewishsource.com.

This article originally appeared in the October edition of JUF News.

I'm a writer, editor, photographer and artist living in rural Southeastern Wisconsin. I grew up in Chicago, made my way to the deep woods of Northern Minnesota and then landed here among the cornfields and cows. It's quite simply my happy place. View All Posts

sharing my life through photography

On March 4, 2016 our three year old daughter Maria died suddenly of a seemingly common illness. One week later our daughter Lucy was born. These are our reflections as we face death, grief, and new life.

Edge of Humanity Magazine
The Art of Now