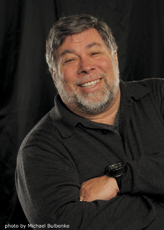 Steve Wozniak has been a Silicon Valley icon and philanthropist for more than three decades. He helped shape the computing industry with his designs of Apple computers. Through the years, Wozniak has been involved in various business and philanthropic ventures, focusing primarily on computer capabilities in schools and stressing hands-on learning and encouraging creativity for students. He currently serves as Chief Scientist for Fusion-io and published his New York Times bestselling autobiography, iWoz: From Computer Geek to Cult Icon.

During a recent phone interview, Wozniak talked about his passion to make the world a better place, the importance of patience in developing new products, and his secret life as a teacher.

JUF News: You have said you wanted to build things to make the world a
better place.

Steve Wozniak: I was inspired first by the idea that a bunch of people believed that small, affordable computers were going to make things possible that we never imagined. Those ideas started with people like Douglas Englebart and Ted Nelson, people who wrote books, almost from a hippie perspective, about how machines of the future that could never be built at the time they came up with their ideas-way too unaffordable-but how these machines could someday work to link our society, link our information together.

In your book, you wrote that patience is “underrated,” particularly in tech industries. What did that mean?

When a company comes up with a product, an idea, and maybe it’s a computer with a mouse like Apple did…the technology that will be needed to make that computer, to make it the right way in computer engineering terms, is going to make it too expensive to sell this year, but because prices of things like memory chips come down, it will be totally affordable five years later.

In that case, have the patience and work on it, and work on something until you know-don’t let it out and try to sell it just because you can sell some. You’ve done something new and outstanding and different. Wait until…it’s going to be successful no matter what. Steve Jobs might say, “Wait until it’s insanely great, rather than just plain great.” But even when he was using that phrase, he put out the Macintosh too early.

The Macintosh had a lot of weaknesses and it failed hard, and our stock dropped in half. The real solution was [to] stay in the laboratory with the computer …and just wait until it’s affordable and you’ve written more and more great software for it so when it comes out, you own the market. Steve Jobs learned that lesson and he was more patient [with] the iPhone.

Why did you want to teach kids?

When I was very young, my father taught me what engineers did was good and important for people, it gave them more free time and better product in their life, and I decided that was fine. But he also taught me the value of education in your life, that your teachers were some of the most important people you’d ever have as to how far you get, being able to have a job someday.

I was in sixth grade and I remember telling my dad, “I’m going to be an engineer like you first, but I’m going to be a fifth grade teacher like Miss Skrak, second.” That whole idea was deeply embedded in the core of my brain, and my entire life I paid attention to any articles or any classes or things in books that had to do with the child’s mind developing.

I was giving computers to schools, and I told myself, you know what, you don’t give computers. That’s just easy, to give money. What you do is you give something valuable like your own time, something that’s limited, and I started teaching. I really enjoyed it and I taught students how to use computers for all their school stuff.

It came from internal caring about young kids, especially in the importance of education.

This article ran in the May 2014 edition of JUF News.

I'm a writer, editor, photographer and artist living in rural Southeastern Wisconsin. I grew up in Chicago, made my way to the deep woods of Northern Minnesota and then landed here among the cornfields and cows. It's quite simply my happy place. View All Posts

sharing my life through photography

On March 4, 2016 our three year old daughter Maria died suddenly of a seemingly common illness. One week later our daughter Lucy was born. These are our reflections as we face death, grief, and new life.

Edge of Humanity Magazine
The Art of Now